Spiders are predators that feed on insects and other arthropods. Most often they are quite beneficial to our environment, and are harmless. In the United States,  about 6,000 species have been identified and only two groups occasionally are harmful to humans. Recluse and widow spiders have been associated with significant pathology and very rare reports of death.

First we are going to talk about the types of venomous spiders that you might encounter in the North America, then you can follow these tips to help keep these venomous spiders outside in nature and out of the spaces that we work, live and play. In the case of a spider bite, contact a physician or your state Poison and Drug Information Center as soon as possible for advice and assistance. If possible, collect the spider to aid diagnosis and correct treatment procedures.

Distinguishing characteristics include three pairs of eyes arranged in a semicircle on the top of the cephalothorax (combined head and abdomen) and a violin-shaped marking immediately behind the eyes in some species. This marking also gives them the name “fiddleback” or “violin spider” although the violin marking is faint or missing in some southwestern species.

Most recluse spiders are found living in large numbers in human structures. Males, females and even spiderlings are capable of venomous bites occasionally creating a disease state now known as necrotic arachnidism.

The bite itself is often unnoticed and the severity of the reaction varies greatly between individuals. In the rarely-exhibited case of necrotic arachnidism, the bitten area becomes painful, swollen and blistered within hours. This site will evolve into what has classically been described as a bulls-eye lesion with a dark center (dead skin) outlined by white and set on a red and inflamed background. It is several weeks before the blackened area falls away, leaving a pit of scar tissue. On rare occasions, the response involves a large amount of tissue destruction and a serious life-threatening systemic reaction.  Medical care for most recluse bites is simply rest, cold compresses and neutral position of the patient.  More extreme reactions may require surgery. 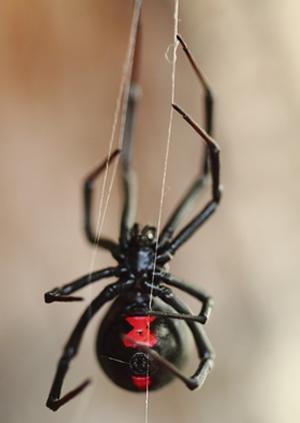 The common “black widow” spider specifically refers to the eastern species Latrodectus mactans. Our widow species Latrodectus hesperus is however very similar in appearance to the true black widow. The female is  toxic and males much less so due to their small size and weak jaw musculature. Females are shiny black and about 1.5 inches long. The famous characteristic mark is the reddish hourglass shape on the underside of her abdomen.

Like the recluse spider, the bite itself is not terribly painful, but local pain does follow very shortly after. The venom can cause abdominal pain similar to appendicitis as well as pain to muscles and the soles of the feet. Other symptoms include alternating salivation and dry-mouth, paralysis of the diaphragm, profuse sweating and swollen eyelids. Most healthy people recover rapidly in two to five days but the rare fatalities that occur are due to heart and lung failure.

If bitten, clean the site well with soap and water. Apply a cool compress over the bite location and keep the affected limb elevated to about heart level. Ibuprofen or acetaminophen may be taken to relieve minor symptoms. 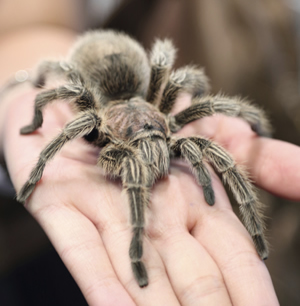 Tarantula spiders belong to the family Theraphosidae. They are our largest spiders. The males can reach a length of 2 to 2 ½ inches and the female 4 inches. These spiders feed on arthropods and small vertebrates such as mice, lizards and snakes. Females can live as long as 20 years. All species are nocturnal, living in burrows that they construct. During our late summer months, the males are seen moving through the desert in search of mates. Tarantulas are usually very timid and secretive but when threatened they can bite. They have large fangs that can cause pain. Their venom is usually harmless to humans. Another method of defense is using the hind legs to rub hairs off the top of the abdomen. This cloud of fine hairs can be irritating to the eyes and mucus membranes so be careful when handling these spiders.

11 Tips to Help You Bug Proof Your Home From Spiders