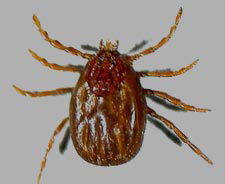 When a tick feeds it takes up whole blood, extracts the
water (about 70-75% volume) and injects the water back
into the host. For this reason, they are efficient vectors
of a variety of disease causing organisms such as bacteria,
spirochetes, rickettsiae, protozoa, viruses, nematodes,
and toxins. A single tick bite can transmit multiple pathogens
as well as creating secondary infections and allergic
reactions. Ticks therefore are the most common transmitters
of vector-borne disease in the U.S.

Ticks have four stages in their life cycle, and all require
blood from a vertebrate host to survive and complete
their development. Like most other arachnids, adult ticks
and immatures (nymphs) have four pairs of legs; the
larvae (hatchlings) have three pairs. Although there are
many species of ticks in Arizona, humans are likely to
encounter only three. Two of these, the brown dog tick
(Rhipicephalus sanguineus) and the Rocky Mountain
wood tick (Dermacentor andersoni) are “hard ticks”,
which belong to the family Ixodidae. The third species,
the adobe tick (Argas sanchezi) is a “soft tick” belonging
to the family Argasidae.

Rodents and deer are most often associated with ticks;
however, between the many species of ticks any wildlife
in the yard may be infested. The brown dog tick
rarely attacks humans, but is the most pestiferous species
from the standpoint of the Arizona homeowner because
it is a parasite of their canine pets. During their
lifecycle, they frequently drop off the host then climb up
walls and vegetation and reattach themselves to a passing
host. Larvae can survive as long as eight months
and adults as long as 18 months without feeding.