What is Lyme Disease and how do I protect myself from ticks?

What is Lyme Disease?

Lyme disease is caused by the Borrelia burgdorferi bacterium and is carried by infected black-legged ticks. It can be a chronic debilitating disease of humans. Initial symptoms include fever, headache, fatigue and skin rash. Left undiagnosed and untreated, the disease can spread to the heart, joints and the nervous system. The blacklegged tick or deer tick, Ixodes scapularis spreads the disease in the northeastern, mid-Atlantic, and north-central United States. The western blacklegged tick Ixodes pacificus spreads the disease on the Pacific Coast.

The adult black-legged tick is active during the fall and winter, and nymphs are active in spring and summer. Both nymphs and adults are capable of transmitting the bacterium to humans.

Lyme disease begins in up to 60 to 80% of patients as a slowly expanding reddish rash known as “erythema migrans”, typically 3 to 32 days after the bite of an infectious tick. This rash, which may not be apparent on dark-skinned people, usually begins at the location where the tick attached and expands slowly to several inches in diameter before disappearing within 3 to 4 weeks. Antibiotic treatment reduces the duration of the rash to about a week. Many patients experience fatigue, headache, fever, chills, and other flu like symptoms during the initial stage of illness.

Without treatment, other signs or symptoms may occur days to months later. These can involve the skin (multiple secondary rashes), musculoskeletal system (migratory pain in joints, tendons, muscles, or bones), neurologic system (severe headache, facial palsy, memory loss), and enlarged lymph nodes. More rarely, inflammation of the heart or eyes, or liver damage, may ensue, too.

People with untreated late-stage Lyme disease may begin to experience signs or symptoms months or years after infection, which may result in arthritic, neurologic, or further skin manifestations. Deaths attributable to Lyme disease are rare events: sudden cardiac deaths linked to Lyme carditis (inflammation of the heart) were reported during a 9-month period in 2013 for three young adults who resided in the northeastern United States.

How Wide-Spread is Lyme Disease?

The ticks that vector the disease are a fairly common species and it’s fairly easy for humans to contract the disease.  Doctors are concerned about the rising number of cases in some parts of the country, and that a new study by Centers for Disease Control researchers has shown a geographical expansion of the area where Lyme disease occurs.

Researchers have now found black-legged ticks in 49 percent of all U.S. counties spread across 43 states. This represents an increase of almost 45 percent from 1998, when tick distribution was last mapped. Each year, approximately 30,000 cases of Lyme disease are reported to CDC by state health departments and the District of Columbia. However, this number does not reflect every case of Lyme disease that is diagnosed in the United States every year.

How Can I Protect Myself? 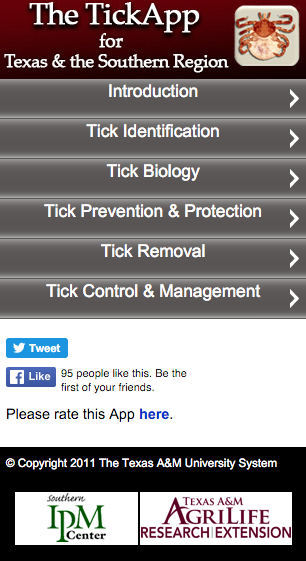 The need to be aware of ticks and the possibility of bringing home a tick or infection from the outdoors remains a distinct possibility, meaning precautions still need to be taken.

We should all use tick repellent and inspect ourselves and our companions for ticks when venturing outdoors. Permethrin-containing sprays applied to clothing are the most effective repellents for ticks, though skin-applied repellents can also help.

Did you find a tick? Additional details on tick identification, biology, geography, control and other factors can be found using the TickApp,  http://tickapp.tamu.edu, which was developed by Texas A&M AgriLife and the Southern IPM Center.

How to Remove a Tick

Individuals should take time to learn the proper method of removing a tick, which is grasping close to the head with tweezers or protected fingers and pulling straight out.

Remove the tick as soon as possible. The sooner a tick is removed the less chance for disease transmission. The CDC advises to avoid folklore remedies such as ‘painting’ the tick with nail polish or petroleum jelly, or using heat to make the tick detach from the skin.

The goal is to remove the tick as quickly as possible and not waiting for it to detach. Plus, heat and suffocants, like grease, may actually stimulate the tick to salivate, increasing your potential for infection.

He said although chances of infection with a tick-borne disease in Texas are relatively low, those experiencing a rash, fever, headache, joint or muscle pains or swollen lymph nodes within 30 days after possibly being bitten by a tick should tell their doctor.

Knowing that a tick might have been involved will provide the information needed to properly diagnose the problem.

How to Get Rid of Dampwood Termites

How to Get Rid of Conehead Termites

Identification How to Submit an Insect Sample for Identification With over one million named species of insects in the world, sometimes you need an

Selecting a Pest Control Company Homeowners need to think about pest control as part of a home maintenance plan. While you can prevent pests from